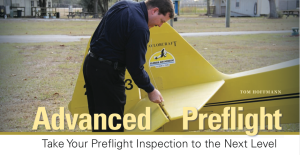 There is a focus in the FAA Safety Stand Down Saturday, April 14th on a more meticulous preparation for flying. Since some 80% of accidents are attributed to an insufficient preparation, this is a good area to focus on to enhance safety in aviation. Here is a great article from the FAA Safety Briefing Magazine.

Every time I think about FAR 91.103, it reminds me of “Star Trek the Movie” where the crew discovers an altered Voyager probe who’s prime directive is: “To learn all that can be learned”.  The actual definition of 91.103 includes: “…to become familiar with all available information concerning the flight.”

So what’s that really mean? You can spend hours reviewing all sorts of information and still not be familiar with “all” available information. Most of us who have been flying for a while have developed a manageable system that involves understanding the weather, the route, the airspace, the airports along the way with particular attention paid to the departure and arrival airports, possible alternates, any TFRs or special use airspace and NOTAMS.

NOTAMS (Notices to Airmen) contain all sorts of information, from airport or runway closures to laser light show presentations and everything in-between. Once in a while, there’s information contained in a NOTAM that defies easy translation. Just recently, my partner in our Aerostar, H. Michael Newman found this NOTAM while briefing for a flight from KBDR to KITH:

What the heck does ASR 1281346 mean?? Definitely non-obvious. To a pilot, ASR means Airport Surveillance Radar, but the numbers, no idea. Mike asked me. I asked David St. George and some others. No one had a clue. However, being a true sleuth as well as a flight instructor (retired), Mike took on the mission to find out the meaning.

So Mike Googled ASR. As you might expect there are lots of responses from our friends at Google – about 70,300,000 responses came back!!! On the first page, there’s all sorts of interesting definitions for ASR:

The seventh entry on Google mentions the FCC’s Antenna Registration System (ASR). You will note the acronym does NOT match what it stands for. However, “FCC” and “Antenna” piqued Michael’s interest. Go back to the NOTAM – “OBST TOWER” refers to an antenna. So with a bit more sleuthing, Mike discovers that the FCC maintains a database of all registered towers. Checking into the dataset and entering “1281346” provides you with this result.

There’s a new antenna (actually constructed in October 2011) in Horseheads New York that has a problem with its lights according to the NOTAM. Problem solved! We now know that ASR followed by a series of numbers refers to the “antenna structure registration” inside of a NOTAM. I won’t speculate why this is useful information for a pilot to know.

But wait…the overall height above ground according to the FCC is 57.6 (AGL)!  The NOTAM says 189 AGL. Why the difference? More thinking and sleuthing. Divide 189/57.6 and you get 3.28125. Ah…Feet vs meters!  Yes, the FCC works in meters while the FAA works in feet!!!  Our government at work. Remember the crash of the Mars probe about ten years ago!  Similar problem.  Regardless, make sure when flying over Horseheads, that you’re more than 189ft AGL or greater than 1,673 MSL!

There’s a bit more to this story. While writing this, I happened to Google: “NOTAM ASR”. What I found were several NOTAM entries similar to the one Mike began with and one entry from a Google Group explaining how to translate a particular NOTAM, that said: ASR is the “antenna registration number – unimportant”. So now we know!