Today’s flying went according to plan, believe it or not.

It was around 10AM when I took off, a bit later than I’d like, but not because of weather, for a change.  The weather in Denver was clear and sunny, and I was in the air soon after starting up. The route I chose to Santa Fe went almost due south across the plains, keeping the Rockies on my right.

Assuming you weren’t interested in the fixer-upper I found in North Texas a few days ago, how about this for the perfect development for a pilot? It’s either Kelly Air Park or Black Forest Air Park in Elbert, CO (Google Earth had both names on it). Pull your airplane from the garage at your house, and you’re on the taxiway…

I did plan the flight to stay east of the Colorado Springs area, as the chart asks pilots to stay well east of the Air Force Academy because of the intensive flight training. There were a couple of well-placed intersections (REEFF and ZENER) which led the path around the class C. That’s the Springs and the Rockies off 493’s right wing:

I feel almost obligated to show a river along the way, to keep up the River of the Day theme, so here it is – at Avondale, CO, at least there’s water in the Arkansas River:

As I went further south, the mountains began to rise in front of us.

Finally, as we neared the New Mexico line, the ground began to rise steeply over the plains, as US Route 160 runs along the base of the hills.

I’d been cruising at 8,500 feet, about 2,500-3,000 above ground level (AGL), but it was time to climb. Eventually I wound up at 9,800 feet to clear the highest hills. The wind picked up as the day got warmer, and the roller-coaster ride started again. At some points we bounced up to 10,200 feet and I had to reduce power to keep from running over redline on the tachometer, and at other times it was all we could do to hold altitude at 80MPH. I’m getting used to it, but tomorrow I plan to get out as early as I can to avoid the whole thing (I hope). 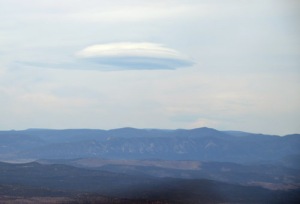 After about two and a half hours we reached Las Vegas, and it was time to turn west to hook around the south end of the mountains and head up to Santa Fe. This is the Las Vegas Airport – easy to see why what happens there stays there, as there really isn’t anything around…

Actually, that’s a different Las Vegas – the one in New Mexico (KLVS). No casinos, just lots of desert.

As we headed west, I got a traffic report which was a first for me – “Cessna 493, traffic at 12 o’clock, two miles, a Boeing B-17”. We were bouncing around too much to take a really good picture, but it was really neat to see the huge  bomber pass about 500′ above and 1/4 mile away. 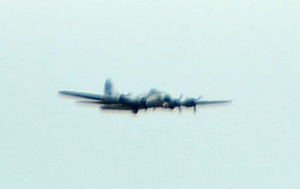 By the time we arrived at Santa Fe (KSAF) the winds had picked up again – when we landed on Runway 20 they were 230 at 17 gusting 24 – but that was close enough to the runway heading that I wasn’t particularly concerned. I just added a few miles per hour to the approach and used less flaps than normal, and it was a pretty good landing if I do say so myself. A short taxi later, 493 was tied down at the FBO and I was heading into Santa Fe for the day. Unfortunately, I forgot to take a picture at the time, so I’ll just show where I landed for the night instead: 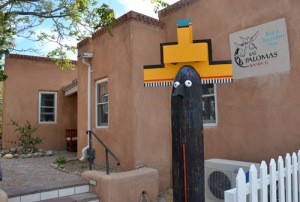