We’re on our way back! – Day 8 – Mack, Colorado to Hannibal, Missouri

Jerry Friedman, ‘493 and I are in Hannibal, MO tonight – and true to the trend of this trip, when I went to bed last night I had no plans whatsoever to be in Hannibal (or Missouri at all, for that matter). The Weather Gods strike again.

We left Mack Mesa (C07) at 7:00AM this morning (MDT), in clear skies and light wind. We’d dipped the tanks on 493, and we had 30 gallons of fuel – more than enough for the 200 miles or so to Cheyenne, Wyoming, our first stop, and we felt that it would be better to go with that than to load the full 52 gallons in the wings for the first leg. It’s as well that we didn’t, as we used nearly all of the 2, 500 foot runway (at 4,500 feet altitude) to get airborne, with the two of us and our bags and assorted stuff we were bringing back east (including a box of rocks – I did some fossil hunting while I was in Fruita).

Anyway, while our climb rate was a bit unimpressive, climb we did, until we had gained about 5,000 feet in altitude and had enough to get over the ridges north of the Grand Junction valley. 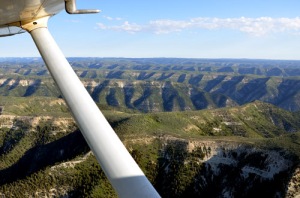 As soon as we could get over the first ridges, we aimed northeast toward the Meeker (EKR) and Steamboat Springs (BQR) VORs, still climbing until we reached our peak altitude of just under 12,000 feet. We aimed for low spots in the ridges where we could see the horizon over the mountains. 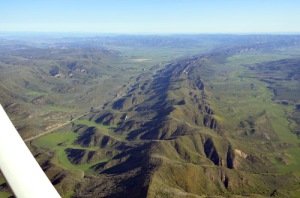 Finally, as we passed the Steamboat Springs ski area, we crossed the highest point in the trip, and it was downhill from there. 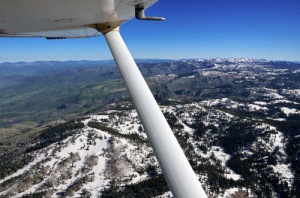 After two hours and 221 miles, we reached our planned first stop, Cheyenne (KCYS). We got a straight-in approach to runway 9, and a great breakfast at the terminal restaurant. 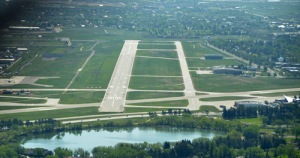 As we waited for our pancakes, eggs, sausage, watermelon, strawberries and hash browns (we just asked for pancakes, but they threw in all the rest), we checked the weather. Our original plan had been to head to Mason City, IA (KMCW) for an overnight, and then go on to Oshkosh tomorrow, but the weather wasn’t cooperating. There was a cold front stretching down across Nebraska, Mason City was already having heavy rain at that time, and was predicted to remain bad all day. Worse, it’s predicted to be bad further north, so it looks like Oshkosh will be for another trip.Time for plan B.

From the map, it looked like conditions would be better further south, roughly along the Kansas-Nebraska border, so I replanned our destination for the day to be Kansas City, with a rest and refuel stop in mid-Kansas. We took off refueled in person and airplane, and with the 6,500 foot elevation of Cheyenne, used a whole lot of their 9,500 foot runway getting off. The weather held along our course back into the plains of Colorado, then into Nebraska and finally Kansas. At least we didn’t have to worry about clearing the mountains… 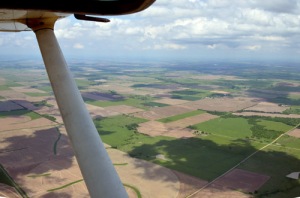 At one point, I swear we saw Pac Man devouring a farm…

After another three hours flying, 562 miles from Mack Mesa, we landed at Concordia, Kansas (KCNK) to fuel and check the weather for the next leg. Concordia had a self-service fuel pump, and an unlocked FBO with a sign “back soon”. We had some 100LL and a few Diet Cokes while we waited for the man with the wireless password.

Once again the weather seemed better further south and further on – to the north of the  Kansas City Class B they were reporting marginal VFR conditions, but to the south of the Class B the ceilings were over 10,000 feet, and it looked OK to get even further. Hannibal, MO (KHAE) was reporting clear below 12,000 feet, and forecast to remain so. Therefore, our overnight stop became Hannibal, and off we went.

I suppose I can’t do a post without the river of the day, so here’s the Kansas River: 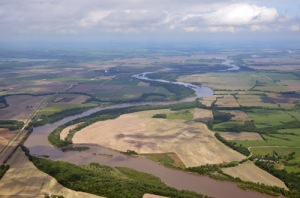 We continued on to the Johnson County VOR (OJC), which is just south of the Kansas City Class B, and turned northeast. As forecast, the weather north of us was much worse, with lower ceilings and rain. We flew through a few light rain showers ourselves – nothing bad, no turbulence to speak of, and the visibility through the showers was fine. It was just enough to wash some of the bugs off the windshield. I kept the worst of the showers off to our left, and bent our course gradually until we were headed direct to Hannibal. At one point the sun broke out and we were treated to a beautiful rainbow directly ahead. 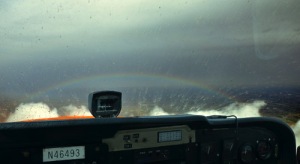 We passed over the Missouri River, which is 10 feet over flood stage according to a report Jerry just read. The flooding was obvious (if unrecorded, because of the uninspiring lighting conditions). The ceilings rose and the clouds broke, and finally, around 6:20 CDT, we arrived at Hannibal (KHAE).

Weather permitting, we plan to go to Dayton, OH, tomorrow to visit the Air Force Museum and spend the night. On the other hand, the way this trip has gone… how’s the weather in Atlanta? Watch this space…

One thought on “We’re on our way back! – Day 8 – Mack, Colorado to Hannibal, Missouri”