By Skyhawk to Florida – Day 5 – Santa Fe to Texarkana

Today’s weather in Santa Fe was picture perfect – clear blue cloudless skies – albeit with a very strong north wind. We dropped off the rental car and were in the air by 9:00 Mountain Time. We climbed to about 8,100 feet to clear the hills southeast of Santa Fe – once you’ve made it over those ridges, it’s downhill all the way to Florida. 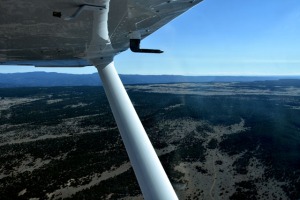 This is a map of our route for the day, courtesy of CloudAhoy, which I had running on the iPad to log the trip. With slight jogs to fit in waypoints at roughly 65-100 mile intervals, we headed basically east southeast for the entire day, crossing from New Mexico into the Texas panhandle, then following the Texas-Oklahoma border most of the day, dropping back into Texas for a while, then finishing up at Texarkana, Arkansas.

Once you leave the hills around Santa Fe, Eastern New Mexico is essentially flat, brown and mostly uninhabited. Roads ramble here and there, for all appearances purposeless. Surely there was a reason for these tracks to follow the paths they did – but what? Something to ponder as the miles slip by under your wings.

At the perhaps ironically named town of Happy, Texas, there is a huge feedlot. A billion Big Macs on the hoof – I’d guess it’s not all that happy for them. 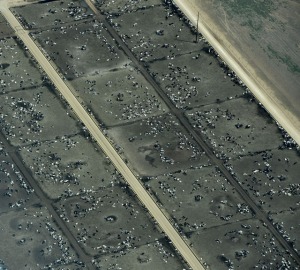 Once into Texas the land becomes much greener and more intensively farmed. At this point, some ranch roads approach and cross the wonderfully named “Prarie Dog Town Branch of the Red River”. 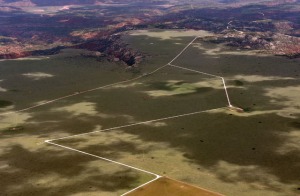 As we progressed east, the winds got stronger – much stronger. Every airport we passed was reporting in the mid-to-high 20knot range, with gusts into the mid-to-high 30’s. We had originally planned to stop off for fuel at Memphis (Texas, not the famous one), but it turned out that they don’t have it. So, we switched to landing at Childress, Texas (KCDS), about 3 hours after leaving Santa Fe. The KCDS ASOS automated weather reported 330 degrees at 24, gusting 32, but they have a runway 36 so I decided to go for it. My landing wasn’t bad, but taxiing with a 30+ knot wind can be really interesting. The Cessna really didn’t want to turn at some points as we taxied to the fuel pump. Fortunately, it was a credit card self-serve pump, since the FBO was closed.

We had wanted to grab lunch at Childress, but it was not to be. The airport has a courtesy car (like Hamilton, it’s a former police car), but with the FBO closed there was no one to give us the keys. There was no way to get into town, about two miles away, other than walking. Not that two miles is such a big deal, but we didn’t want to waste more than an hour getting there and back, plus the delay in eating. So, we taxied back to Runway 36 and took off – with a 30+ knot wind down the runway, old 46493 felt like a STOL 172. We were halfway to takeoff speed before starting the roll!

We continued to follow the Red River, Oklahoma on one side, Texas on the other. From this picture, it’s clear why it’s the “Red” river… 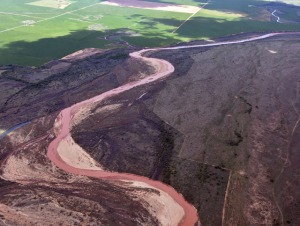 Having passed Memphis-not-in-Tennessee, we continued on to pass Chattanooga – also not in Tennessee. This one is in Oklahoma. 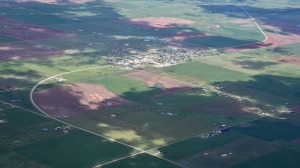 That sort of thing isn’t really unusual. As land played out in the East, settlers would move west and establish new communities named after the ones they had left. You can find strings of similar names across the country – think of Ithaca, New York, and Ithaca, Michigan (or Lansing, in both states), Rochester, New York and Minnesota, and so on.

Clouds began to gather as we left Childress. The further east we went, the lower the clouds, until we were down at about 3,200 feet, here at Texoma Lake.

At three hours, fifteen minutes, after leaving Childress, we were on a right base for Runway 22 at Texarkana, Arkansas (KTXK). 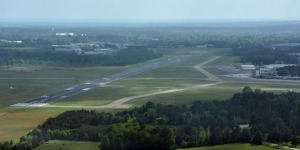 The folks at the TACAir FBO couldn’t have been nicer. They arranged to fuel and tie 46493 down for the night, then arranged for a hotel room and rental car for us, both at a discounted rate.

As it turned out, we landed just in time. As we drove up to the hotel, only four miles from the airport, it started to rain and a thunderhead appeared, with active lightning for a few minutes.

If everything works as planned (and when does that happen?) tomorrow afternoon we’ll be in Clearwater, Florida (KCLW). Texarkana is almost exactly halfway from Santa Fe to Clearwater, so if the weather continues to blow off to the east we should be able to make it in six or seven hours. We’ll see – as ever, watch this space!